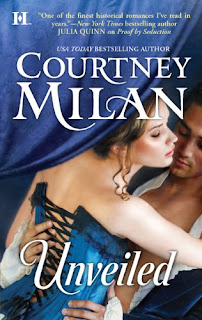 At this point it's just embarrassing.

I should have at least some pride. It's not like it's the first time I've felt this way, there was another author once. (Ok, maybe a few, I'm not going to lie.) At this point I should be able to come up with something a little better for this review than "omgIlovedyourbooksomuch" shouldn't I? I've been reviewing for various places for long enough to know better. This is probably a book with flaws. I have no idea what they are. If you show me, I'll dispute them. This is Courtney Milan's best book. The sheer hell of it is that this is my absolute least favorite romance genre jumping point. I cannot stand books that set up the disinherited heroine trying to retain her property and her resentment of the newly inheriting lordling. Hate them all.

Smarty Pants Milan has knocked the legs right out from under me. In the case of Ash and Margaret, she has every right to be outraged. Rather than a simple death setting off a legal transfer of property, Ash has set out to obtain the property through completely honest but untraditional means. In a wild youth none can even imagine now, Margaret's father married his mistress. Unfortunately, by the time he married Margaret's mother said mistress had not died. (Which begs a question - if that mistress had children would they be in line to inherit? Will Ash end up handing it off to a completely unrelated third party? He's the sort that would, if he felt like it.) So, Margaret isn't just a spiteful princess when she resents Ash so much as breathing the air on the estate, she's just sensible.

Ash isn't headed for a comeuppance, either. He is the legal heir. The current holder of the title is a complete tool who deserves taking down a peg or fifty and his sons are pretty obnoxious as well, if not obnoxious enough for Margaret to realize Ash is somewhat in the right of it all. I think the underlying theme of this trilogy is going to be Things You Don't Tell Your Family. Unveiled isn't a book with unrealistic revelations, it's a book filled with the tiny "why didn't you tell me" moments that lead to so much emotional distance between people. Ash is a creature of instinct. He wants the property because it feels like the right course to take, and his instincts have rarely served him ill. Margaret is just learning what her instincts are after a lifetime of drifting along in her designated lane. Both of them are trying to remain loyal to their brothers while wanting to be loyal to each other. It is a wonderful conflict.

My enjoyment of this book was increased by personal identification. Ash has a crazy bible thumping parent? Me too! Ash has secret reasons for living by his impulses? Me too! Ash had to leave younger siblings behind to secure all their futures? Me too! I could go on, but you were bored at the first paragraph of this review and I've no idea why you've hung on as long as you have. Read this book. Join me in my girlish infatuation. Savor the small moments, such as a few lines revealing why every historical romance sex scene at a ball ever was impossibly wrong, or when the theme of this specific volume is revealed. You matter. You are important. I used similar words last October to explain why romance, as a genre, is important to me.


Unveiled is a perfect example. Buy it. Forget what I said about her last books, buy this one first. Now if you'll excuse me, I have to compose myself before I face the next book I'll be reading. (I feel sorry for it, really. I'll just be going through the pages.)
Posted by Meoskop at 12:59 AM