The Hermetically Sealed Heroine, Can We Let Her Go? 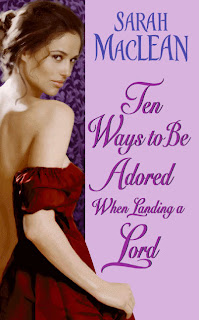 There's a lot of positive buzz for Sarah MacLean's new book Eleven Scandals to Start to Win A Duke's Heart so I picked up the first two books in the trilogy. After making my way through the perfectly serviceable and often enjoyable Ten Ways To Be Adored When Landing A Lord and Nine Rules to Break When Romancing A Rake I had strong opinions about elements of both.  On reflection I realized that my problem wasn't with her work  (MacLean breaks as many molds as she's upholds) so much as it was with a need to retire some genre conventions.

When I started in romance, the heroine was commonly 16 - 18. Sometimes she was even younger, sometimes she was a few years older, but that was the average. Over the years heroines have aged as a result of consumer preferences. Now that we can't imagine a 16 year old making a solid choice for a spouse, many heroines are in their late twenties or into their thirties. (Forty appears to still be unacceptable except in side characters.) Both of MacLean's first two heroines are, by genre convention, older heroines. One is a wallflower, the other is stuck on a country estate trying to make ends meet. In return, they are paired with a rake (in the non rapist genre sense, which I liken more to a slut-boy than a historical rake) and his more discriminating brother. In both cases, the men have lived a life of companionship (for good or ill) and sexual experience.

The women have not. This bothers me. When the heroines were 16 and paired off with a 37 or 45 year old man of the town, you understood their lack of experience and hoped he hadn't picked up any interesting diseases. For a woman in her late twenties or early thirties, it is absurd to have them hermetically sealed for his protection. Beyond the issue of virginity (which is understandable in it's existence but then dispensed with laughably fast when the opportunity presents) these women have never been kissed. The typical lack of sexual agency in the romance heroine of the 70's and 80's is preserved in these older heroines. Why? It's almost offensive to find these women, presented as capable and multidimensional, possibly self pleasuring, certainly ready for a physical relationship, have never had even a pre-teen lip lock with a servant. It's a bit ridiculous, really. So why is it still important?

We complain about all manner of things in the genre. Was it historically accurate, does it line up with our own image of what the character would do, does it line up with our image of what we would do? What does it say about women or relationships? Why do we not complain when a woman falls in love with the first man she kisses? Does she have the tools for a relationship and understanding of her own needs? Can the older heroine adequately judge that which she has no frame of reference for? Why is such extreme purity even desired in books written primarily for women and by women? A book can open with a man sliding out of a devalued women (because any women the hero is physically involved with is inevitably less than fully human when compared to the heroine) and dismissing her as nothing, only to find us rooting for his involvement with a woman who has never kissed.

I don't know what this says about our self image, about power dynamics, about any of the things academics get paid to dissect and discuss. I do know that I find myself tired of it. There's a scene in a recent Boyle book where the heroine and the discarded mistress find themselves in a room having a rational conversation. It was refreshing. Two women, on equal footing, in different places in their lives.  But Boyle's heroine had certainly been kissed before. I can't understand why, when we have discarded so many things that devalued women from our fiction, we hold so tightly to these two truths. Women with physical experience are whores. Women with astonishing levels of physical purity are desired.
Posted by Meoskop at 3:23 PM