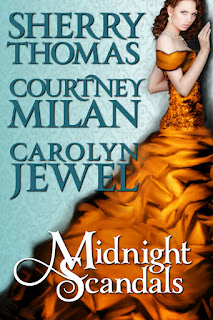 I don't love this cover. The model's expression is a little angry, a little vacant. I don't know why she's leaning against a wall. Her head being slightly lopped while her skirt is artificially extended reads awkwardly. I like the teal and orange combination. I like the bolding of author names over title. Visually it works in Milan's brand, but I don't love it.

That concludes at least three quarters of my objections to Midnight Scandals, which I hereby rename Doyle's Grange for the BBC miniseries that absolutely must happen. (Someone Kickstater that for me.) Midnight Scandals absolutely begs to be a BBC costume drama. Each of the three stories takes place around a small home (cue Doyle's Grange) on a larger estate. As one era passes into the next the elderly couple from the former generation brush paths with the young couple of the next. How is that not prime time catnip? As a well executed concept the home bridges the gaps between the tales, making them stronger collectively than they are alone. As the authors involved in Midnight Scandals are some of the genre's strongest, this takes us pretty close to perfection.

First up is Carolyn Jewel. Her story of lovers with two unforgivable secrets made me realize I don't read Carolyn Jewel often enough. (Why don't I read more Carolyn Jewel? I'm going to buy her backlist.) Reunited as teens after a disastrous affair with long reaching consequences for them both, her couple have to learn to forgive themselves as easily as they've forgiven each other. I adored the risk Jewel took with her secrets almost as much as the heroine's sister in law. I know that woman. I deal with that woman. Like Portia, I would chew my own arm off to escape her. She does not mean well, she is a toxic bundle of manipulation.

Picking up the narrative is Courtney Milan. Her couple have only been apart a short period of time, but that time has transformed the heroine. Thrust out of a comfortable life, Mary has grown up quickly. As with all of Milan's tales the challenge is to discuss the dynamics without revealing the plot. I found the situation Mary escapes (or rather, situations) very well drawn. Each had that essential feeling of truth while allowing for the fictional solutions to play out. All of my issues with Mary and John occur in the wrapping up of loose ends but her benevolent villain was perfectly done.

Closing the door is Sherry Thomas. I've really missed her since I switched away from price fixing in e-books and I'm sorry she's caught up in the publisher fight. I look forward to catching up on her backlist when it's properly priced. (I could pirate them, yes. Please don't message me about it. I don't lean that way.) Because I'm not familiar with her most recent books, the characters from them felt like an annoyance instead of an enhancement. This is obviously a story meant to resolve a character from a full length book but without knowing more about them I was waiting for an explanation that never came. Thomas has a great set up in her tale of mistaken identity and second chances. Buying in required accepting that two people could look completely alike (easy) while being unrelated (no problem, happened to me) and sharing very similar names (um, not so much but ok). Her hero and heroine have nothing to forgive each other and little to forgive themselves. While I admired aspects of the other works more the romantic element felt the strongest here. Her couple fell in love in front of the reader, while the others repaired an existing love.

If the authors want to work off brand, I would love to see a sequel to Midnight Scandals taking Doyle's Grange through the World Wars and into the London Scene. Maybe in reverse order. I think I'd give WW1 to Thomas, WW2 to Milan and the 60's to Jewel. You know, because I'm bossy like that.
Posted by Meoskop at 3:29 PM