DNF Review: Sins of a Virgin by Anna Randol 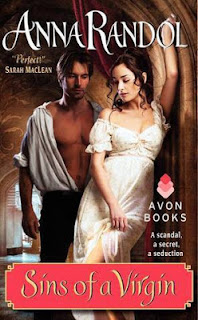 Each reviewer has their own personal ARC policy. Mine is that I will review your book if I accept it, but the review might not be to your liking. I will make every effort to finish your book and reserve DNF reviews for purchased items. I try to get all ARC's reviewed within a week of the publication date. I have failed Sins of a Virgin as completely as it failed me. I don't think this one is necessarily Randol's fault. I've been trying to read SOAV for close to a year. I keep stalling out very early in the book. I'm not even really reviewing SOAV. I'm using it to talk about reader reaction.

Madeline is a Secretly Chaste Courtesan who has decided to sell herself to the highest bidder. She hires Gabriel to ensure that the bidder she selects will be able to pay her fee. Gabriel is a Bow Street Runner looking for his sister's killer, some of whom are bidding on Madeline. On paper, this should be a good read for me. I'm okay with the Secretly Chaste Courtesan set up because Madeline is up front about her status (hello, book title!) and her reasons for the auction make sense. Except they don't. This coupled with Gabriel's super moral disapproval derailed me fast and kept me from getting far into the novel.

Madeline has spent ten years working as a government spy because reasons. Despite her service to the government, she is left unable to establish herself properly and therefore makes the choice to auction herself off. Here my reader reaction stops the story from moving forward. How are all these heroines pretending to work in the sex trade without ever suffering a sexual assault? In an age where rape was so common and so hard to prosecute, how are they navigating these men while keeping body and soul intact? How has Madeline worked as a fake courtesan without being tested? This myth that these girls can be trained in seduction, live among men and pass as purchasable goods without being assaulted seems so much in line with the Hermetically Sealed Heroine that I can't turn my mind off. What are we reading when we read about these women? Often (as in another recent DNF read but not this one) the hero is busy obsessing over what a durty durty hurr the heroine is while his employees are inexplicably reacting to her as if she is their better. When the hero realizes she is not a durty hurr and falls to his feet in tearful apology we are supposed to feel... something. Something besides impatience.

On the surface the message of the SCC or HSH is one of redemption. You have misjudged me, you have wronged me, I was not the durty hurr you assumed, but the lost daughter of aristocrats, meant for better things than I have had. As an apology, you may elevate me to my proper status. I shall play Lady Bountiful for your people, who saw what you could not. (If it's true that we read to escape into our privileges, then perhaps my recent problems with these romances has been a misalignment of needs.) I cut my teeth on the romances of the 70's, where a woman wandering alone was a woman moments from a gang rape. While I don't miss the days where love meant a disco floor and an act of violence, I do miss the message that the woman was still loved. At the end of whatever happened to her, she was still worthy. She had value. The hero wanted to be with her for her. She was, as is the core message of romance, enough. So often these days I feel that while the heroine has gotten smarter, stronger, more capable, her actual worth has diminished. He wants her even if she is a durty hurr, but it's ok, because secretly she's not. Even if she's been married before the odds are very good he was gay or impotent or drunk. Even if half the men in town claim to have banged her like a townie against a dumpster, it's all a lie. She is too good for that.

If she's good, what are the rest of us? If the message of the 70's and 80's was Stand By Your Man and As Long As He Loves Me, what is the message of the 90's and 00's? Is Madeline a virgin because she's more deserving than the other girls? Because she's smarter, as though being clever can provide safety from predators? What made her immune from being used in every way a tool is used in a time when she would have been so very disposable? I give Madeline credit for honesty - she has decided to exchange her body for money. She will do whatever she is required to do to meet the goal she's set for herself. I'd like to stick around long enough for Gabriel to tell her to tun off the red light, but I haven't been able to. My brain won't stop asking questions the book can't possibly answer.
Posted by Meoskop at 8:00 AM